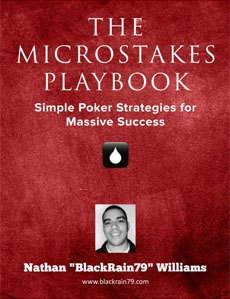 Writer: Nathan "blackrain79" Williams
Title: The Micro Stakes Playbook
Year: 2017
Who should read this book: Poker players stuck on microlevels who wants to develop their game.

Nathan Williams (a.k.a. "BlackRain79")  third book about poker strategy, The Micro Stakes Playbook (released in 2017) shares a lot with his previous two, especially Crushing the Microstakes. Some areas are touched a second time and inevitably the author is sometimes repeating him self. If you haven’t read any of his previous books, you get more of his ideas and if you have read Crushing the Microstakes and made progress from it, you can for sure find new hand examples here that will be fruitful.

The Micro Stakes Playbook is all about how to win money from micro stakes and Nathan Williams is probably not doing anything wrong by stuck to the same subject area. After all, he is one of the biggest experts on micro-stakes. The philosophy is “to quietly make that easy money” on the low stakes derived from the premise that you “consistently exercising a substantial skill edge versus much weaker opponents”. So it is winning steady money by grinding instead of take a shot on higher levels.

If you aren’t aware of it, it takes considerable hard work to achieve a good win rate at micro levels. You will learn all about it by reading this book. Williams himself is obviously putting much time into review and post-analyze his hand sessions. Although the demand for hard work, the positive thing is that you don’t have to be an expert to earn bucks from these levels. You don’t have to know all the advanced play in the book. What you need to know could probably be found in this book.

There are poker books and there are poker books. If you wish to be entertained with anecdotes and stuff like that, such as Phil Hellmuth's animal allegories in his Play Like a Pro or if you want a journalistic approach as in Andy Bellins’ Poker Nation, this may not be the card game book you’re looking for. Nathan Williams books are packed with instructions and comes with a high information density. The content includes some of the wise “proverbs”, but more of the concrete hand examples. The proverbs are perhaps flashier and easier to pick up, but it is probably by studying the detailed hand examples that you can make big step forward as a player.

What you get in The Micro Stakes Playbook is concrete examples how you achieve an exploitative strategy. Since the micro stakes involve most weak players it is also the level where the ability to exploit weak plays to the maximum really pays off.

If you are not familiar with tactical concepts such as semi-bluff, c-bet, 3-bet and floating this book will give you the fundamental tools to become an advance player. If you already know these concepts by name, you are probably not completely sure when and how to use them. There are many examples in this book that tells that and lots of other strategical methods.

There are many ways to group players in regard to playing styles and one typical way is the LAG/TAG/LP/TP. Williams use six categories of players: Nits, TAGfish, TAGs, LAGs, Whales and Maniacs which he put into three groups: bad regulars, good regulars and recreational. This book makes you realize the importance to group players according to player styles and gives advice how to recognize and exploit each.

As said before, this is not a book that teaches how to win at the highest stakes. But it is nevertheless for the ambitious player. The book gives some promises that you can be a winning player, but at the same time it is honest by saying that it also demands much from you.

The book can only be ordered from the author’s website blackrain79.com.