In a tournament, it can all from 50 players to 500 or even more. Obviously, your goal cannot be always to win, but to get “in the money”. That means reaching a position that is in the prize list.

One of the big factors in tournament play is luck. In big tournaments, you will need more luck than in a sit n go tournament. That’s because of the multitude of players and the rich amounts of all in situations that you must survive.

One day a chump, the next day a champion. What a difference a day makes in tournament poker.Mike Sexton

You need, of course, some specific tournament skills as well. A big part of playing tournaments is to be aware of the structure that you are playing. Similar to a sit n go game, the blinds are raised in time intervals, which affects the nature of the game. In tournaments, the blinds will eventually get tremendous high and when it happens it’s very much about defending and attacking the blinds.

Don’t be obstinate about defending your blinds, you must have hole cards that are meaningful to defend with. It’s usually better to steal. Because when you do this it's you who is the active part and it’s you who decide when, which means that you can attack the blinds in favorable terms. In other words, it’s a big difference to go all in to call all in. When you decide to raise big or go all in you can win without contest.

Online tournaments on lower buy-ins are sometimes almost a mayhem in two ways:

1) As already discussed: the tendency of numerous all in.
2) The second “absurdity” is shown especially in the beginning. Some players will become loose-aggressive players with kamikaze instincts. Something has brought them to the conclusion that it’s all or nothing and chips must be accumulated as fast as possible. If you got lucky with the cards in these sequences you can be winning bigger pots than in most other forms of poker.

The fact is that many players have a special (sort of understandable though) attitude in tournament play. They think: “I have already put in 300 of my 1,000 chips in this pot, what’s the use continuing with 700 chips against hundreds of players owning 1,000 chips or more? I will be eliminated in about an hour or less and that’s just a waste of time – let’s go all in and hope for the best…” As you understand, you have great chances to collect a lot of chips in the early stages of a tournament.

Many players play on a rush in the opening stages because they think that if they don’t double up early on, there’s no idea to go on. If you follow this attitude you must rely on luck. Hopefully you have learned that the luck wins once and the skill wins twice. It’s much better to wait for a strong hand and then win big pots against the rushing players.

Table dynamics describes the relation between players that are affected by their different stack sizes. Three main categories of stack sizes are short-stacks (small amounts of chips), middle stacks (medium amount of chips) and chip leader (the player at the table, alternatively in the tournament, with most chips). 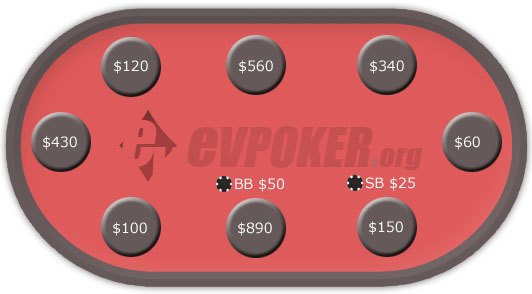 When you are the short-stacked, the risk is that other players on the tables trieas to bully you. Your blinds are a constantly target. In most cases you can't afford to call bets to protect your blinds, it's better to wait for an enough strong hand to re-raise all-in or try to steal other players blind by going all-in.

With a middle size stack on the table you should play tighter against the biggest stacks and looser against the smallest. Player with big stacks are harder to bluff, but instead you could win chips from than by calling with strong hand because the may try to bluff you. Against smaller stacks you should try to steal blinds, but watch up for short-stacks who can reply by going all in since they are desperate. Therefore, you need stronger hands when you try to steal blinds from a short-stacked player.

The player that is the chip leader have a huge advantage. Because of his superior chip stack, he is the only player that cannot be eliminated by losing a single pot. That is a fact he should try to profit from as much possible. He can do this by being aggressive with frequent pre-flop raises. Many players want to avoid playing against the biggest stack on the table and will therefor fold more often than otherwise.

One important concept in tournament play, introduced by David Sklansky, is that the chips is worth more than you have few than you have plenty. Tournaments are all about finnish as high as possible. For example, sometimes can few chips more than other players help you through some orbits without the nessesity of going all in. In opposite, when you are the chipleader, more chips are always welcome, but yoy want climb any more placement.

In the excellent book Kill Everyone, the authors states that "There's a non-linearity in chip value in tournaments and each chip you gain is worth less than the chip before it".

What does this mean? It means that you shouldn't always be willing to gamble with your chips, beacuase even if you have 50% chance to double up it would not be twice as good to do that as loose all your chips (except if that's only you and another player left in the tournament).

This view on chip value are although not fully agreed upon. Arnold Snyder, for example, calls it "The Erroneous Chip Value Theory" in an article.

If you succeed to be one of the remaining players when the majority has left the building you are closing in on the prices. Let’s say it were 250 players from the start, and it's now 50 players left, whereas 30 players will get “in the money”. The bubble is in this case the place number 31 and the situation that occurs now is like, metaphorically speaking, when you have been on the sea for a long time and you finally can see land. It’s just 20 paddles to make before you’re on the price list. So how are you going to act now? As gentle as you can to not let anything go wrong? No, if the water is calm upset it!

The reason for this is that when you are approaching the price places, many players get cautious because they don’t want to risk elimination so close to the prices. Consequently, you are in a profitable situation. If you are an ambitious player you strive for more than a 37th place and the entry fee back.. If this is true about you, in the long run you will gain more by utilizing the bubble situation.

In this case, it’s important which player’s you choose to be aggressive against. The players with big stacks and the short stacked players are not the ideal opponents to show aggression against. The best is to attack players that neither can call your raise easy nor being desperate enough to call. These are the player’s with middle stacks.

After the bubble there are more phases in a tournament and in the article about sit n go strategy you can read about circumstances that are similar to the endgame of a tournament.