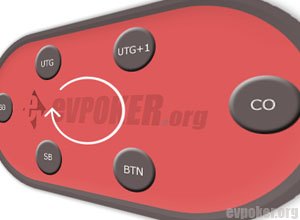 In Texas Hold'em and many other poker games, positions play an important role. Since the game is based on imperfect information, it is normally an advantage to act after the other players because their acting can give a hint about their card holdings.

Poker variations such as Texas Hold'em and Omaha can be played on tables with different sizes, very common are six and nine places on the table. Regardless which, position will always be important. For a beginner, it's important to understand how the order of action change during a hand before and after the flop is dealt.

If you don’t know about the positions in poker, you will get that explained to you right now. Let’s look at this table inclduing six chairs: 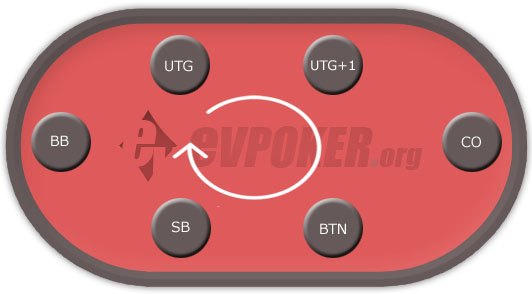 The name of the positions and the clockwise order in poker, illustrated on a 6-max table.

The abbreviations stand for:

UTG - under the gun, the first player to act.
UTG+1 - the next position after under the gun.
CO - cut off, the position before the button
BTN - button, the name derives from the fact that this is the position if a player would deal (a button should lay in front of the dealer).
SB - small blind, this player must post a small blind, a fixed amount of chips
BB - big blind, this player must post a big blind, double the size of the small blind.

This is the names used when referring to positions in poker. The next thing to know about is how the position changes after the flop.

You have to be familiar to these two configurations and plan your game upon it. As you can notice, the player with the button will later become in the position and to be in the position (last to act), is a big advantage. The player in position will have all the information collected when it's his turn to act. If you’re fond of bluffing, this is the bluffing pole position. And, if you're a tight and solid player, playing in position will involve the least risk taking.

This concludes that although the small blind can “limp in” on half the price, he also get the worst position after the flop.