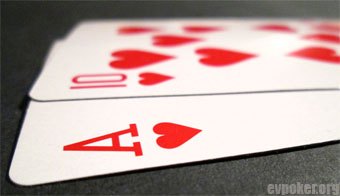 Heads up is player versus player, a duel that sometimes turns out hazardous. It can also be poker on a very advanced level. If you want to win more than one out of two head to head combats in poker, you have to learn how to handle these situations with the right strategic approaches.

Chess teachers often say it’s a good idea to start learning from the “endgame” to develop a deep understanding for the game. Heads up is the endgame of Texas hold'em. Even that chess may not coincide fully with poker, playing against one player hand after hand will move you to the essence of the game, and you are being forced to conduct both the cards and the opponent.

First, you must understand that the values of starting hands are different from playing numerous opponents. The speculative hands that decrease in value in shorthanded compared to longhanded will decrease even more. And the power cards are going up in value even more.

All in starting hands

In heads up you are never far away from an all in situation, so you must learn which starting hands are reliable in these cases. A static, machinelike way of playing, is not recommended, but it’s good to have an idea about which cards you can rely on in general. Here are some guidelines.

1) Pairs are very strong in heads up – if you hold a pocket pair you will be a favorite against all other non-pair hands (with a few exceptions), and the chance both players holding pairs is 1 of 289.
2) A hand like K-4 off suited, normally worth very little against several players, is a short favorite against the average hand.
3) The worst hand in heads-up is 2-3 off suited because of its lousy all in prospects; it wins less than 1 out of 3.

When the opponent is short-stacked you should be much more willingly to call an all-in raise. How often depends on his stack in relation to big blinds. If he has only a few BB, you should be ready to call with almost any hand.

The table shows some typical situation in which two players get involved in an all in situation pre-flop.

In some of these situations, the percent can slightly differ depending on if the hands are suited or not.

All in is one method, but there are more subtle ways to handle heads up matches. If you could choose, wouldn't you prefer to get rid of your opponent in a more surgical manner? It’s both fancier and less risky compared to putting all your chips in for an all in duel with luck as the judge. Poker is seldom about 100%, but you want to increase your chances to the maximum. How will you accomplish it? The answer is patience and acting deceptive.

You could reply to a raise with a big re-raise with the low pair after the flop. That works from time to time. But, if you can wait until you got something better, like a set, you can lure off an ardent player all his chips.

Poker is all about the situation, so you must be able to handle both methods discussed here. In heads up you need to know when to be aggressive and when to be patient.

There are only two positions in heads-up. When you have the small blind you are in position - the last to act after the flop. This is the better position, and therefore you should play more starting hands.

When you are the big blind, you will be first to act post flop, which normally is harder. Therefore, you should play less hands from this position. But it is important that you don't let your opponent steal to many blinds from you, and the best way to counter raises from the small blind is to re-raise. Since you would prefer to win the hand instantly pre-flop, you could raise a bit more than when you raise when from small blind. By the same reason, it is also a good idea to raise when the small blind just call pre-flop.

Recognition of patterns and utilization of response

Like always, you should play the cards as well as the player. The guidelines above are mainly about which cards to play, especially in heads up, now it's time for the specialities of playing the player in heads up.

Bully the passive player and trap the loose-aggressive. Yes, this is fundamental and can be a very effective approach, but it's not always as simple as that.

As you are fronting only one player, it’s critical to learn his way of acting. Consequently, you better watch out for him to read your play. It’s not just about if he is a tight or loose player. To succeed in recognize patterns of your opponent, you must focus on the way he is betting – when and what sizes in different situations. Pay also attention to all cards that you see at showdowns and try to learn about his playing style.

It's also important that you're adjusting your play after how the opponent is responding to your pre flop actions. If he in a majority of hand drops his cards to your raises, you should utilize this and raise with a higher frequency, even with hands that are normally not raising hands.

How does the opponent react when you limp in: is he constantly raising in the belief that you haven’t all that dangerous cards? This is something you can use for trapping your opponent. Continue to limp in with mediocre starting hands occasionally and fold if he raises too much. Sooner or later you will have a pair or an Ace with a good kicker, if the opponent raise after you limped in then re-raise. If the opponent show impatience you have big chances to win a decisive pot.

This is how you play deceptively. In general, you can slow play more hands – like two pairs and even a top pair depending on the circumstances – in heads up compared to situations with more players involved. It’s a highly effective way to make a profit against loose and impatient players.

To avoid that your opponent learn your playing style and exploit you, you should mix upp your play.