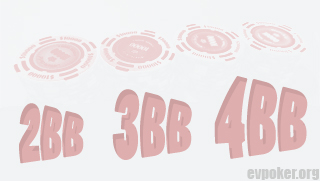 In these days it has become common to raise often pre-flop also among players on very low limits and many incorporate this concept fast. Of course, to raise doesn’t demand theoretical insights per se, but it’s has been more common that players do this just because of pure strategical reasons and not just by their natural playing style.

Raising pre-flop is from a strategical perspective in general better than call, the so-called limp. Most players will definitely agree upon this. The well-known poker player Daniel Negreanu explains this further in this video plus some general pre-flop strategies.

The most common raises are probably 2BB and 3BB. 2BB to 2BB could be seen as an small-ball poker approach, however, many advocates a 3BB pre-flop raise and this could be seen as a standard. So, in a $1/$2 as a 3BB raise would mean a $6 bet.

Many advance players will, however, vary some depending on their position.

What follows are some standard-like suggestions of pre-flop raising from different positions:

So why diverge from a consistent pre-flop raise? One of the reasons are simply connected to the gap-concept. If you play solid strategic poker you should be more selective with your opening range from early positions versus middle and late position. So raising with a bigger amount from early positions make sense since you on average have a stronger hand, if you play accordingly to the mentioned gap-concept.

Another reason concerns the odds. If you raise first in from a late position, you will on average get fewer callers, which will give every single callers worse pot odds. So, from a mathematical perspective, there are not necessary to raise as much as usual from a late position.

But why is the betting amount increasing again for the SB position? This is because of the positions that will arrive after the flop. The small blind will play with a positional disadvantage against the big bland on all three post-flop streets. Consequently, SB has extra interest to win the pot pre-flop.

Therefore, it can be an advantage to diverge from a consistent raise. You could when chose to raise 3 or 4 in all early positions or diverge further depending on the position. You could, for example, choose to raise 4BB UTG and 3.5BB UTG+1. It demands more from you, but it could also improve your result.

If you want more on the subject including RFI ranges, see the article My Unexploitable Preflop Opening Strategy Explained by the pro player Ryan Fee.

The common mistake to avoid when raising pre-flop

This article has explained different possibilities to raise before the flop and especially in relation to the position on the table. What you not should do is to raised based on your cards. Some players tend to raise extra with hands like T-T and J-J, because they don’t want contenders with over cards. This is understandable from one point, but it’s no good poker since it could potentially give the opponents a hint about the hand – and leaking information is fundamental to avoid in this game.