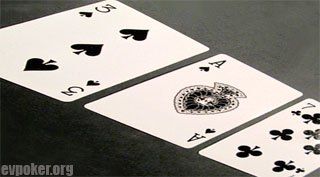 In Texas hold'em, the cards placed by the dealer on the board is called community cards. The community cards are dealt in three phases, which namely is the flop, the turn and the river. This is not the case in all poker variations, but you will face this order in the most popular games, such as Texas hold'em and Omaha.

These two last phases are also called streets (4th and 5th street, respectively) and there's betting rounds on every street. There's also a separation of before and after the flop: pre-flop and post-flop.

In other words, we can separate a hand in poker in four phases with following betting rounds. This will, of course, create some strategical circumstances. It's time to look into these.

Some players are very reluctant to fold their hands before all community cards have been revealed on the table. But staying in the hand and calling bets with mediocre holdings only because you want to see if your hand will improve or to be absolutely sure that the opponent has you beaten is very far from an optimal strategy.

There are certainly some cases when calling on several streets is the right approach, but only when the odds are positive.

In poker, we don't want negative odds and we don't want to be passive. Instead, we want to operate either before the flop or directly after it – this said in general, not as a strict rule.

The operating before the flop is primarily based on the strength of our hole cards. The benefits of patience are huge and a good player in poker is a disciplined one (this is probably true in all forms of gambling). This means that a great number of starting hands should be folded immediately. More about starting hands criteria is discussed in another article.

The action directly after the flop is critical. Here we must plan our actions for all the remaining betting rounds. The call-and-wait-and-see-approach is not good poker. Let's say we have a draw, in this case we must consider the odds and also the value (how big the pot is going to be) in making the hand.

If we need a card to make a straight, but there are two suited cards on the board that also has been paired, it is an immense risk that our hand will be beat by a flush or a full house even if we make the straight. Or, maybe we will be forced to lay down the straight in a later betting round facing a very big bet. This is an example of bad planning.

The best action in most cases is therefore 1) to fold directly or, 2) to make a bet or a raise. By betting or raising we get information from the opponent's response and, not the least, we get a chance of winning the pot right away. This is a solid way to play poker.

Strategical thinking on the turn

The turn is often more complicated when the flop. On the flop you can always try to win the pot with a c-bet and it will not be too costly in most cases. But on the turn, the pot is often bigger and you must more often think about stack commitment from you and your opponent.

If your bet was called on the flop, will you bet again? This can be a very hard decision with a marginal hand. If you bet again, you will lose more money against a better hand; but if you not bet, you will show weakness and your opponent could take over the initiative.

When acting on the turn, you should also think about what will happen on the river.

Strategical thinking on the river

No river, no fish.Amarillo Slim

One of the most important things on the river is to value bet or not. Many players that have been called both on the flop and the turn will act careful on the river and only check. This could be correct, but in many cases your opponents are calling with a marginal hand, for example an ace pair with a worse kicker and you will lose profit by not bet a third time.

It is important to understand though, that you should not bet in situations when your opponent most likely will only call with better hands than yours and otherwise fold.

The art of Cash game