How and when to play straight and flush draws 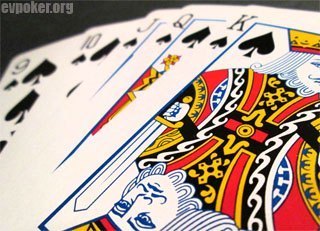 Flush and straight hand plays an important role in poker. This is because they beat most other hands, and they are constantly in player’ minds – every time there are two cards on the table in the same color some begin the treasure hunt and other starts to protect their hands.

When a fifth card can form a straight, you have a straight draw.

The numbers in parentheses represent your outs, the cards which are needed to make an open straight-draw to a straight.

Since there are four cards of the same rank in the deck and your straight can be fulfilled with two different ranks, you will have eight outs. In percent, you have 17% chance to hit this draw on the turn and 17,4% chance to hit on the river in Texas hold'em.

There are also gutshot straights-draws:

In these cases, you have less chance to hit a straight since only one rank will fulfill the hand you want. Instead of eight outs, in this situation you have four. In percent, you have 8.5% chance to hit this draw on the turn and 8,7% chance to hit on the river in Texas hold'em.

You will hit your open-ended straight-draw a little more than 1 out of 6 on the turn or the river. And when you do, you will often win the pot. Because of that you should not call if the cost to call is more than one sixth of the total pot. And, if there are possibilities that another player will beat a straight with a flush or better you should be extra restrictive.

You will hit your gutshot straights-draw a little less than 1 out of 11 on the turn or the river. Normally, you should fold with this hand when facing a bet, there are not often enough pot odds for a call to only four outs.

When a fifth card in the same suit can form a flush hand, you have a flush draw. The odds for making a flush is a little better than an open ended straight-draws, you have nine outs instead of eight.

That also mean that you can call in situations with a pot odds around 4-1 or better on turn and river, respectively. If the board is paired, a flush can potentially lose against a full house or quads, which decrease the equity and you should consequently be less inclined to call.

Many players, especially beginners, are very fond to call with these types of drawing hands. There are two problems with that. The first has already been mentioned, the drawing odds may be too low compared to the pot odds, which makes a call a long-term negative investment. The other thing is that a straight or flush, especially a flush, have relatively low implicated odds. Meaning, that when you hit your flush, for example, the opponent will surely notice that there are three cards in the same suit on the table and will probably be reluctant to bet much or call big bets.

On the other hand, there are two situations in which there are great chances to win really big pots. These are when you have a higher straight or a higher flush when your opponent.

How to avoid frustration in poker