How to recognize and exploit playing styles 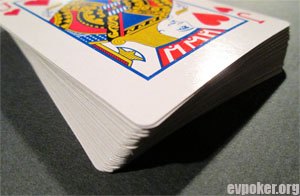 One thing a winning poker game are built on is the observation of the opponents and a correct adjustment to their playing styles.

Recognize styles and exploit them

When you have play poker a while, you will probably soon start to notice playing style patterns. Some players are careful and seems for the most time waiting on really strong hands, other are impatience and tries to win a lot of pots. Between these types, there are of course difference of degrees.

It very beneficial if you can categorize the players at your table. Doing that is the first step to exploit their styles. Against the careful players you play aggressive and win many pots because they are reluctant to invest without a strong hand. Against the impatience players you must expect calls and you when you bet you should have a legitimate hand.

There are other types as well. Some players are relative loose, but prefer that other players makes the bets. These players are easy to handle since they don’t fight for the initiative. The main mistake you can do against them is to bet and get called with air – just because they don’t bet themselves doesn’t mean they don’t have something. Sometimes, these players check/call and bet on the river in cases they have a strong hand – you must have a good hand to call on the river in these cases because these players don’t bluff mush neither do value bets with thin value.

The right place on the table

Many players seem to forget that it can bet important there you sit in relation to other players.

You don’t want players to raise too often after you pre flop, for instance. That means that you must reconsidered if you should play certain hands time after time. If a player has raised before its you to act, you have that information gathered.

This must not be true in all cases. Sometimes it can be negative to have a player directly to you right that often raise pre flop. This means for example that it's a risk he's going to steal the position for you when you are on the button.

Many players are to lazy to change tables, or take other things in consideration for that is a beneficial table for them. You should, although, consider to change table if you have been placed just before players that raise much.

How to approach better players

Why memorizing is crucial in the game of poker