In the field of statistics, noise and signal are two central components in analyzing things. Noise is data that really doesn’t matter, but nevertheless can be hard to see through. Signal, on the other hand, is the vital matter that really tells something about the collected data. 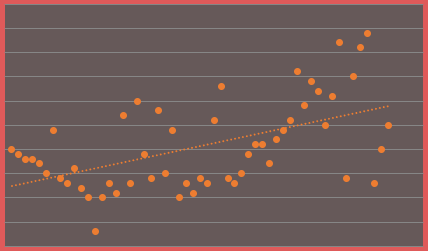 In the diagram the dots indicate noise and the dotted line the signal (as the overall tendency).

In poker, signal is, among other things, the answer to the fundamental question: “Is the result a true mirror on my performance, or is it a skewed but the influence of luck?”

Noise, in this aspect, can be seem as the results from single sessions, that don’t necessary tell much about the players skilled.

Is short-term is totally irrelevant?

It is often claimed by poker theoreticians that short-term is totally irrelevant. That it will anyway soon be drown in the long-term outcome.

From a theoretical view, that is of course true. If you want to be a successful poker player you must focus on the long-term. But it is not completely accurate in practical life. We won’t live for thousand years, neither are most of us going play poker in their whole life. This matters since some occurrences only take place once or on a few occasions.

In reality we are often stuck somewhere between short-term and long-term. Many of us won’t play plus 1,000,000 hands and even if 200,000 hands are plenty it will nevertheless be influenced by short-terms conditions to some degree. It is actually possible to have a 100,000 hands downswing.

Also, in reality, we are not playing the same conditions over and over. This is even more plausible for tournament player compared to cash game players. A tournament player can play hundreds of large tournaments before he finally ends up at a final table. And when he does, he will be playing under short-terms conditions. To take an extreme example. A player that still have ships when there are 30 players left in a WSOP ME final table are likely experience a one-in-a-lifetime opportunity. That’s short-term.

If you are very lucky, you could be playing for a Sit & Go-lottery jackpot. If you do that, don’t think you have big chances to do it a second time. That’s short term again.

So, in many ways short-term does play a significant role. Short-term should not be ignored which is often done by poker authors that seems to think theoretical scenarios is the only that matters. By as the have seen, it’s not always so in real life.
The short-term events are not especially relevant when looking at statistics from a big sample of outcomes. Although, that don’t stop the short-term event to have an effect on us when they take place. Real life is also psychology.

If we choose to spend some hours each day to play poker online and the results are bad, it will impact our joy that day. We decided to do something and was hoping to get something good from it and then have to face that we were losing. Even if that shouldn’t matter much on our monthly result, at least in theory, that day it mattered. As humans, we are reaction about things that happen in the moment. Long-term perspectives are in that way always something of an abstract construction.

The importance of being disciplined