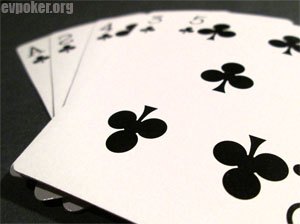 The rules in Razz are fundamentally the same as in Seven card stud, but with one important exception: the lowest hand wins. This is also the reason for Razz being called Seven card stud low occasionally.

The game begins with every player being dealt three cards: two open and one hidden. In opposite to Seven card stud, the highest open card begisn the betting round. In the betting rounds that follows, the player with the lowest hand begin instead.

In the end, every player has seven cards. After the first three cards, the fourth, fifth and the sixth cards are dealt open, and when the seven is dealt dark.

How is the lowest hand decided?

As mentioned, the worst hand wins in Razz. A pair will be better than two pairs and so on. Straights and flushes are not counted, and therefore, you can count A♥-2♥-3♥-4♥-5 as a premium low hand. This is actually the best possible hand in Razz.

The five cards out of your seven that makes the best, i.e. lowest, hand is the hand that counts. The player with the lowest hand will win the whole pot.