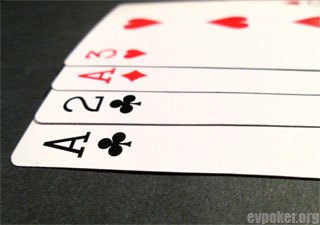 Omaha Hi/Lo is a so-called split game – the pot is split between the highest and the lowest hand. There are, however, cases when only the highest hand wins. The criteria for a legitimate low hand is that five cards in total (remember that you always must use two cards of your own hand and three cards from the board in Omaha) is eight or lower – this is also the reason for the second name of this poker variant: eight-or-better.

When only the highest hand wins

If no player has a hand consisting of five cards that is eight or lower, the highest hand will take down the whole pot. And in these cases, the standard hand ranking is used.

There are also some special cases there a player indeed has five cards that are 8 or lower, but still can't count this as a low hand. This is according to the rule of duplicated cards. Duplicated cars (i.e. pairs and so on) can't be counted as low cards. An example:

When both high and low hand split the pot

When it is also the possibility that one player has both the best low and high hands, which gives him the whole pot. The rule is that he can use all four of his cards – two each for low and high.

It happens often that more when two players split the pot. Often the case is that one player wins the high and two other players has the same low hand. In this situation, the high hand taking half the pot and the two low hands are splitting the rest of the money.